Linked by interest careers in art, built environments, woodcraft, and architecture, I have turned my creative attention to building chined skin boats and traditional paddles. This interest has been a natural development, in the making for about 10 years, starting with my introduction to Greenlandic Kayaking. In learning how to use these incredibly adaptive and ingenious tools, I became more and more immersed in building both paddles and skin-on-frame kayaks.

I am particularly interested in matching qajaq archetypes to their potential end use. Over the long course of skin boat history, many different solutions have been engendered, conjuring the materials of the moment, and working from the same basic elements: coordinating one’s body, boat, and paddle, along with the primary waters of their use. Of course in the supposedly modern world, most of us, even in Greenland, do not hunt from kayaks, the original idea of these wonderful craft. But that does not mean that these skin boats can’t be well adapted to any number of present day water environments. 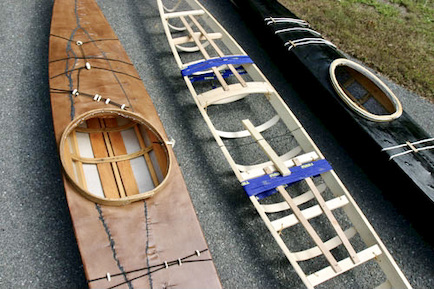 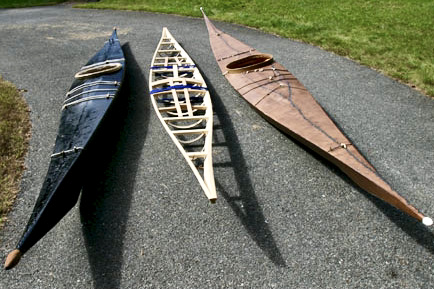 I have had the good fortune to have owned and studied both replicas and original kayaks. I adapted many ideas for my first qajaq from a replica of an 1842 East Greenland Qajaq, the LC148, built by Harvey Golden, now in my care, and a qajaq that Maligiaq Padilla built for me and shipped from Greenland, in the winter of 2003.

Seal-hunting replicas, East, South, West Greenland, as well as the many recent and present day qaanat of West Greenland, of which I tried and studied many during my stay in July of 2005, are my basis, now the growing seeds in my mind. I cannot begin to thank folks like Harvey and Maligiaq, as well as others, and they would, I am certain, tell me that would not even be appropriate. We are all seekers after all. Different backgrounds, different cants, but exploring a medium, the hard-chined skin boat and the unfeathered paddle, dredging up the mysteries, the ghosts of time, hoping to glimpse beyond the surface, through layers of mirage.

I have had the opportunity to paddle and or survey and photograph many others, including the qajaq Maligiaq built in the USA as a teenager, now in Richard Nonas’s care, and the qajaq that Maligiaq won several rolling championships in Greenland in, now in the custodial care of Cheri Perry and me. Several replicas that Harvey has built for himself or others. Richard has loaned me, for trial and replication, his recently completed DeRijp replica, a kayak originally collected by Dutch whalers in the 16th Century. Quite intriguing this project, as Richard had had the benefit of Harvey’s build of same, built on order for Dan Segal. There are just enough internal tweaks in the Nonas rendering to make the difference between uncomfortable and comfortable for my particular set of bones. And I intend to, barely noticeable, tweak a bit more. We are humans, after all. We cannot help but to tinker! 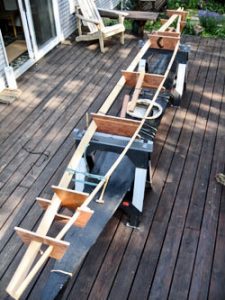 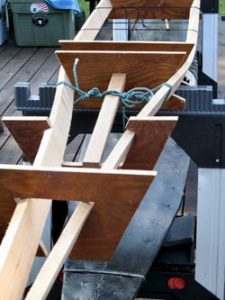 In process of building a replica of the rolling kayak of Maligiaq, previously mentioned.

It is important stuff to me, this foundation. But I do not build solely replica, I am as interested in assisting others realize their qajaq dreams as I am in chasing my own. Ultimately, every kayak starts with a human being, an intention or purpose, a skill set, and an environment. The Inuit laid down the inukshuks, the guide stones. More and more Outlanders have studied and been awed by the complex simplicity of these water structures. Today, we still have very little evidence, other than general racial physiology, and rudimentary guidelines, to help guide us in a deeper understanding of what human size some of these replicas were in fact built for. 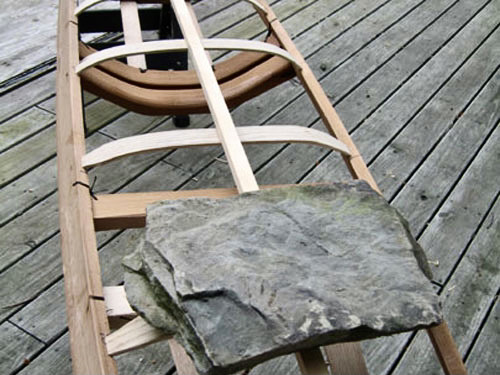 But we know, from Peterson, and many others, that this was a rule of thumb game, not the stage of tape measure and calculator. The body is the key to open these doors of time. Every human being has a unique set of anatomical relationships. One of my initial frustrations in trying replicas, was that I was too damned big for many of the ones I wanted to try, so I shed several admittedly extra pounds in order to begin to approach the weight range necessary to fit several of these kayaks at all. Fortunately I am of average height, and have short leg bones, and I am fairly flexible, but others are none of these things! Over time, and much trial and error, I have begun to understand what sort of fit, where, is important to me. Now I just as much enjoy taking a human map and working them towards an archetype, as I do exploring how a replica may suit my body, and my skill (or perhaps it is how I may suit the kayak?). There is value in both efforts.

So now, I build custom skin on frame kayak, on order. If you wish to pursue your own kayak dream but don’t have the time, skills, tools, or inclination to build one yourself, if you would like a kayak built to your specs and paddling environment, do not hesitate to be in touch. Whether you desire a open water, rough water, or dedicated rolling kayak, I am happy to discuss particulars with you. For more on how I determine how a kayak can be built to suit either as a custom build or a building workshop, follow this path. I can be contacted at turner@kayakways.net.