This is the Sea 5 DVD 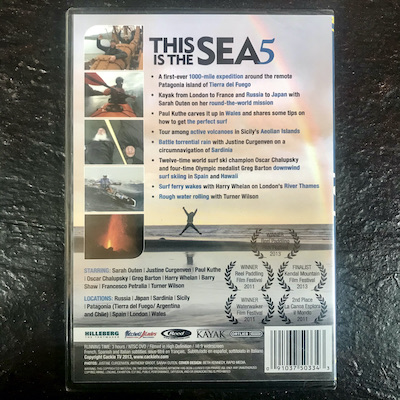 This award winning DVD contains 8 adventure sea kayaking films from around the world. It's beautifully shot in high definition in Russia, Japan, Spain, Hawaii, England, Wales, Sardinia, Argentina, Chile and Sicily. The latest in the series of inspirational sea kayak documentaries has been described by "Canoe & Kayak UK" magazine as 'probably the best one yet'.

They say, " The breadth of sea kayaking stories covered across the individual films on this DVD mean that there's something to grab everyone. .. [They] are held together by their inspiring quality and excellent film and production values..... Captured on the films aren't just the amazing sea kayaking action sequences and stunning destinations, but expert advice, commentary and compelling human stories of conquering adversity in a beautiful but ultimately harsh and unforgiving environment.